Main page > Success stories > Less consumption – more safety. How Sambir started saving electricity through lighting system refurbishment
Five years ago Sambir was faced with an energy challenge. On the one hand, increased electricity tariffs were taking more and more money from the town budget. A considerable share of that money was payment for the street lighting. On the other hand, there was almost no space for reduced electricity consumption, since many streets of the town did not have any illumination at all. However, a way out was found. The search of ways to reduce electricity consumption by Sambir has been in place for several decades already. In 2013 it led Sambir Town Council to participation in the European Initiative ‘Covenant of Mayors for Climate and Energy’. It unites towns and cities striving to reduce energy consumption and environmental impact. Participation in the initiative made it binding for Sambir Town Council to develop its Sustainable Energy Action Plan. Under this Plan, the town was to reduce carbon dioxide emission by 2020 by at least 20% as compared with the 2009 figures. 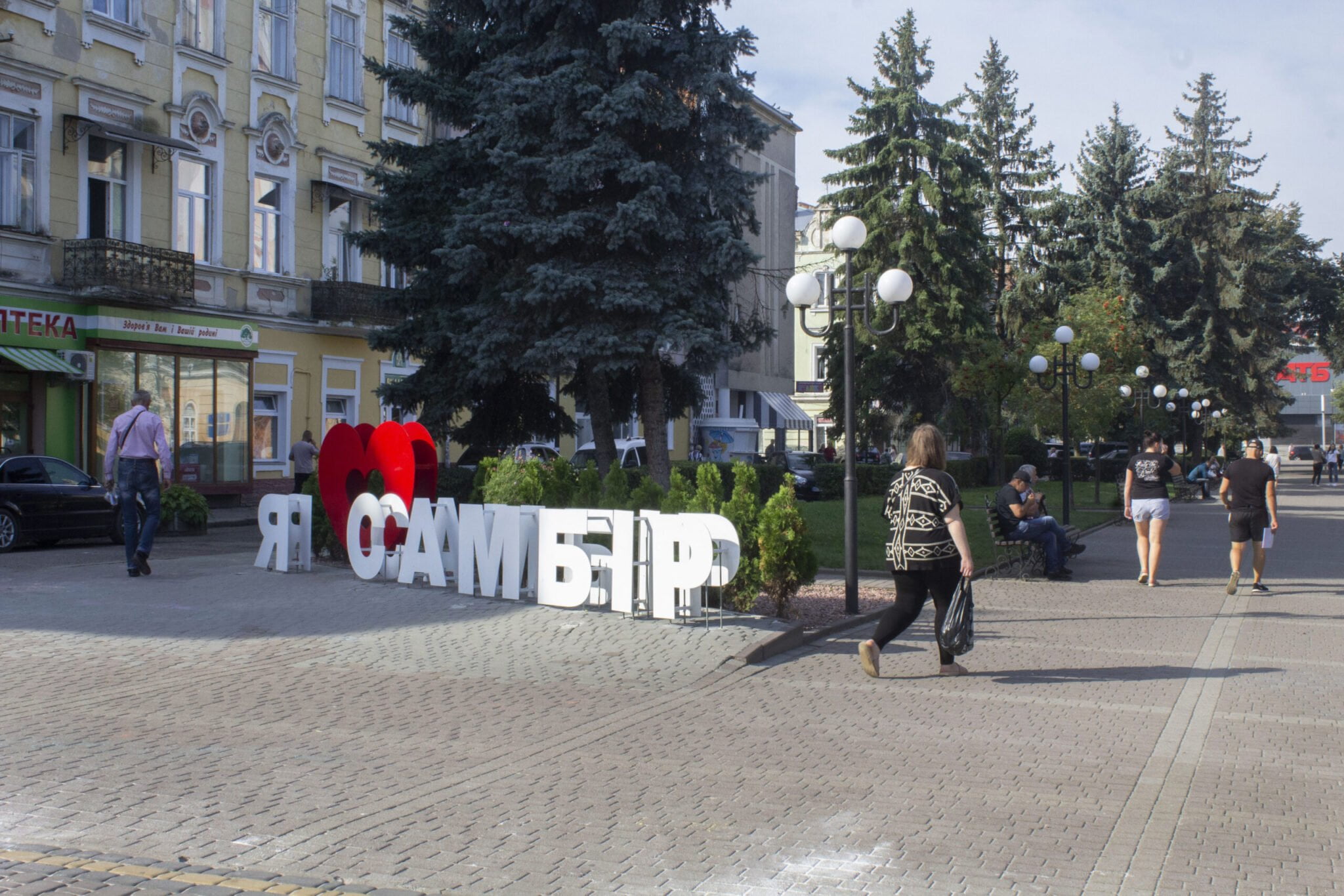 – We don’t just want to be a progressive town. We always try to make the town budget less overburdened: we look for co-funding, different projects, – there comes the explanation of the deputy town mayor of Sambir Ihor Nesterak.

The goal indicated in the Sustainable Energy Action Plan of Sambir does not mean just taking care of the environment. That is also an attempt to reduce the costs of maintenance of public institutions, street lighting, residential and industrial sectors, transport. However, the town did not have adequate resources for really substantial energy refurbishment of its infrastructure at the initial stage of the Plan implementation.

– Then [in the first years after accession to the Covenant of Mayors – author] we spent some 10 million UAH on the maintenance of the town facilities. Most of the municipal budget money was spent and is still spent on education and medicine. Thus, we could not implement multi-million projects, – says Svitlana Dutko, the head of the Department of Economy of Sambir Town Council .

An opportunity for a drastic change in the town’s energy consumption arose in 2014. Then, within the Covenant of Mayors framework, a competition for demonstration projects was announced. Sambir already had some ideas ready, that could be implemented within such projects. Svitlana Dutko states that several infrastructural projects were ready with the Town Council back then, which included the street lighting refurbishment plan. However, it needed some further development.   The authorities of Sambir decided to get the backup from the NGO East Europe Foundation for high-quality development of the project application and participation in the selection process. Finally, the town submitted an application for the tender ender jointly with this organization and Zhovkva the authorities of which had the town’s heating system refurbishment plan.   Such thorough preparation yielded its fruit: Sambir got some 7 million UAH for street lighting system refurbishment from the European Union. However, within the competition the town had to provide co-funding for the project – some 1.1 mln. UAH. Svitlana Dutko tells that Sambir managed to make some savings here as well: the town also submitted an application for project funding to Lviv Regional State Administration. So, half of these costs were undertaken by the regional budget.


– Most of our money is spent on social provision, as well as maintenance of educational and health care facilities. Certainly, energy refurbishment project could be developed in those domains. But for us safety of residents would also be important, – tells Ihor Nestorak.

According to deputy town mayor, there used to come many complaints from the residents of many streets located far from the centre of Sambir to the Town Council. They complained about the absence of street lighting. Even if it was there in some streets, lamps there were switched on only till 01:00. The rest of the time up till 06:00 there residents had to be going in the dark. 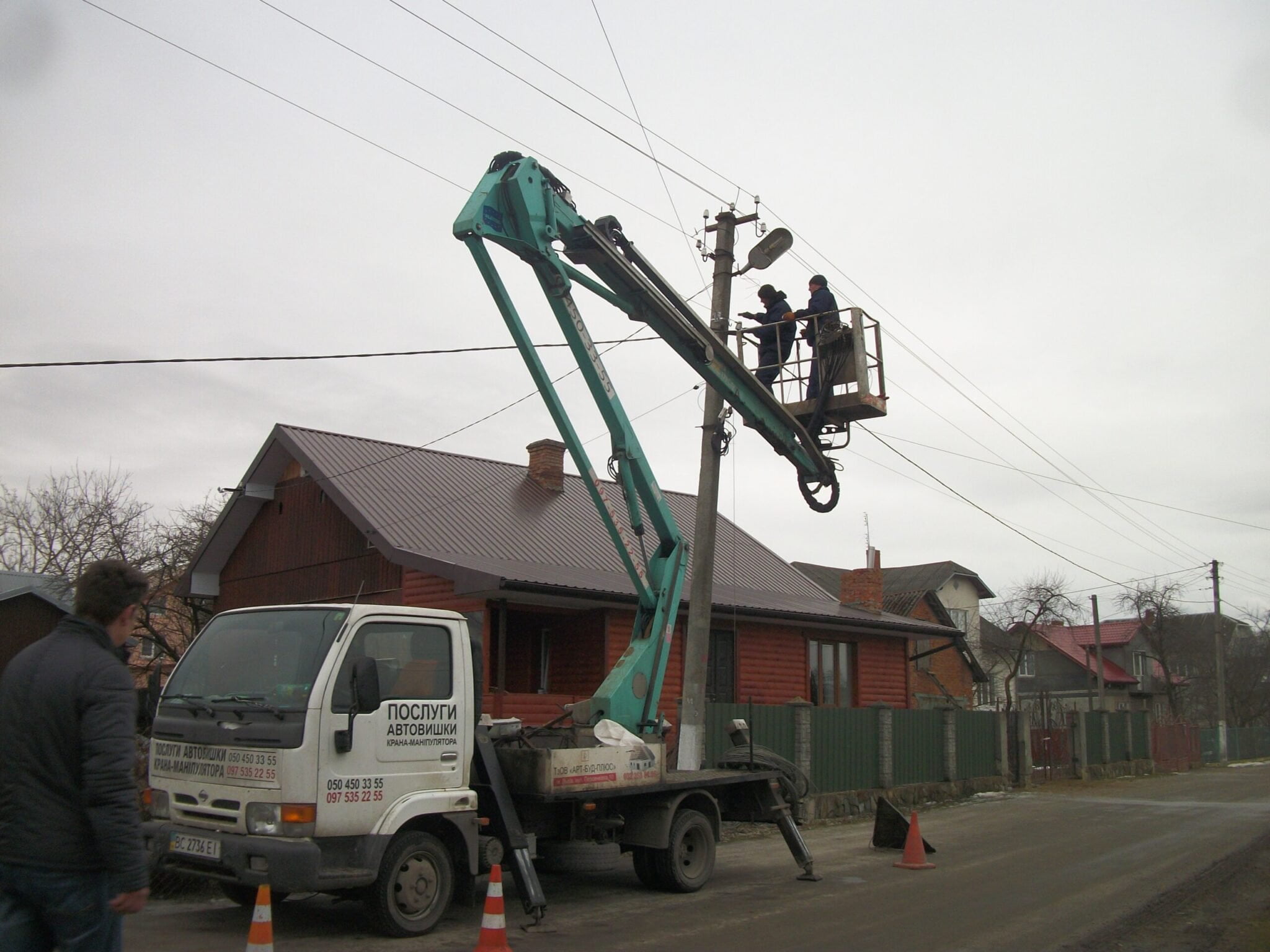 The town authorities did not have a chance to solve that problem in a comprehensive way within many years. Therefore, they submitted the street lighting system refurbishment project to the competition of demonstration projects of the Covenant of Mayors.

– The residents showed their positive attitude to this initiative. We had to replace several tens of kilometres of the network built back in the Soviet times. Due to its age, in many streets there were frequent blackouts, – explains Svitlana Dutko, the head of the Department of Economy, to substantiate her choice, and says that the project was also important for the town budget. Since in 2014-2015 electricity tariffs started growing rapidly, in particular, for the towns. And old networks were energy-consuming.

837 new luminaries and 56 new pillars (including 22 decorative electric supports in the historical part of the town) were installed in Sambir. While the capacity of old Soviet lights reached 150-300 W, the absolute majority of the new ones consume 30 W, and some of them – 100 W. And new lamps provide a better quality of lighting.

– In each street, where we planned the works, we conducted a survey. We asked people where new sources of light should be installed. For them to feel comfortable, for the light to be in the places where people are going, – says the head of the Department of Entrepreneurship and Investment Activity of Sambir Town Council Oksana Fur. She was responsible for project management on behalf of the town.

During the implementation of the project, almost 26 kilometers of cable were replaced in Sambir. According to the information provided by Sambir Municipal Company ‘Objednane’, the overall length of the street lighting network in the town makes up 64.9 kilometers. That is the project allowed to replace over 40% of its length. 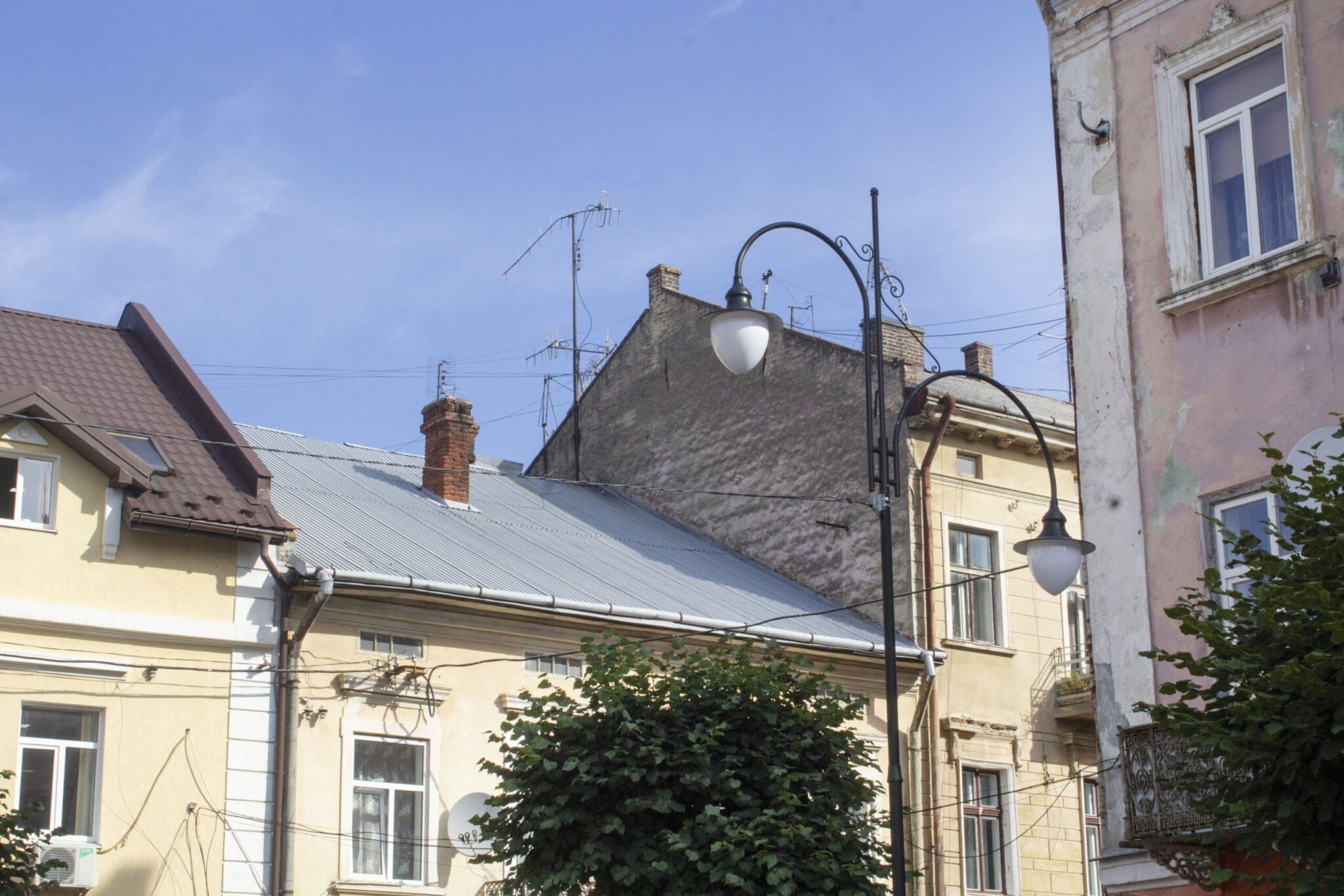 The refurbishment lasted over the period of 2015-2017. In general, new luminaries were installed in 24 streets of Sambir. Some of them became lit over the night for the first time ever. The town got economical street lighting. And now there is no need to switch it off for certain hours in the nighttime – lamps are lit over the whole period of the dark period. According to Ihor Nestorak, now about 90% of Sambir streets are lit. The town could only dream of that some ten years ago.

– New lighting has reduced the number of complaints coming from residents, the number of offences has gone down. Though we are not lighting more streets, but we consume less energy than we would if we were lighting all of them with old luminaries, – says Ihor Nestorak about the effect of the project. According to him, it is difficult to estimate real monetary savings. Since over the period of the project implementation electricity tariffs increased several times.

Street lighting replacement is not the only component of the demonstration project in Sambir. Also, four electric supports were installed there, with solar panels. Thus, four pedestrian passages became lit in the town centre. Also, distribution power boards were replaced throughout the town. Now the street lighting system is secured against breaks and circuits. And municipal utility services now have a chance to monitor topical data about energy consumption and to have timely detection of drawbacks.

Finally, the works included one more component, important for the town. Sambir is the town that started its history in the distant Middle Ages. Several outstanding monuments of the New Age, many important edifices of the XIXth-XXth century have been preserved here. Therefore, Sambir treats the memory of its past very carefully. Finally, it is of interest for tourists.

The demonstration project within the Covenant of Mayors has enabled to install modern lamps around 7 architectural monuments in the centre of Sambir. Oksana Fur says that outstanding historic edifices have never been illuminated in the nighttime before.


Energy and economical effect from the demonstration project in Sambir are most noticeable and simple for understanding. However, as Svitlana Dutko says, social and environmental components are also important for the town. 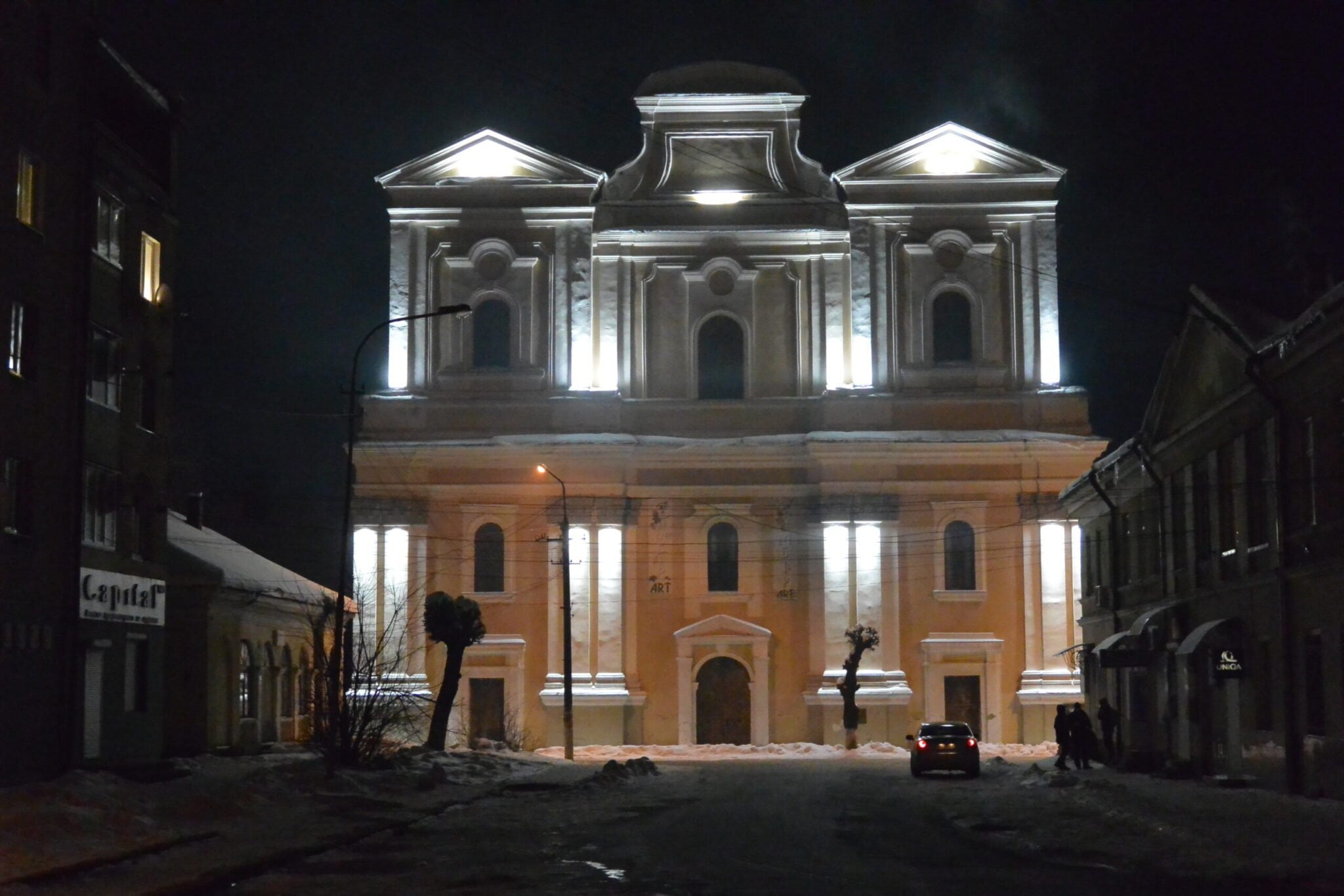 The project also included communication with residents, in particular, with children. Energy saving classes were held in the town schools. Some institutions still have them, already after the project completion. In school No. 8 there is an exhibition class where one may get acquainted with modern energy-saving technologies: wind and solar power generators, special lamps.

– We live in an eco–friendly area: side by side there are relocated Staryi Sambir wind and Sambir solar power stations. We try to meet this standard. Take children on excursions to those stations, – says Svitlana Dutko.

According to the head of the Department of Economy, proposals on energy refurbishment keep coming to the Town Council on a more frequent basis. The residents of Sambir see upgrading of infrastructure of the town, therefore they now support such initiatives more frequently. That enables Sambir authorities to participate in more projects related to energy efficiency.

Oksana Fur also links to the demonstration project in Sambir a change in the approach of the Town Council and municipal institutions to any repairs in the town. If works presuppose an energy component, they perform them only in accordance with modern requirements. For instance, they use only energy-saving sources of light.

Sambir Town Council participates in different grant projects aimed at energy refurbishment of buildings maintained out of the town budget. Now in the town’s schools and kindergartens windows are replaced, in order to make energy consumption in them more efficient. The system of lighting in two more streets was replaced at the expense of the town.

– We want to further be changing, in accordance with energy-efficient principles. Our present Sustainable Energy Action Plan is designed for the period until 2020. Our membership in the Covenant of Mayors will also last by the same time. But Sambir Town Council is already collecting the data for the new strategy. We hope that we will prolong our membership in the Covenant till 2030, – Oksana Fur says that Sambir has a lot more energy-refurbishment plans.

According to the latest report on SEAP implementation by Sambir, published in the autumn of 2018, the town has reduced carbon dioxide emission by 13.5% as compared to the level of 2009. And at the moment Sambir involved only 18% of the investment planned. Here people have learnt how to save and care for the environment.